Why Is the U.S. Selling Billions in Weapons to Autocrats?

Why Is the U.S. Selling Billions in Weapons to Autocrats? - By Zach Toombs, R. Jeffrey Smith, and the Center for Public Integrity | Foreign Policy


The export of American arms to countries around the world -- even those actively repressing their own citizens -- is booming.

Three nations with records of suppressing democratic dissent in the last year -- Algeria, Egypt, and Peru -- are listed in the report as recently receiving U.S. firearms, armored vehicles, and items from a category that includes chemical and riot control agents like tear gas. The State Department confirmed that U.S. tear gas was delivered to Egypt up to the end of November, but has declined to confirm it was also sent to Algeria and Peru. 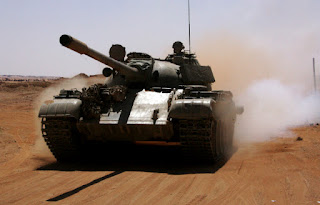 The export of American arms to countries around the world -- what the State Department calls a tangible expression of American "partnership" -- is in fact booming. The commercial arms sales reviewed by the State Department reached $44.28 billion in fiscal year 2011, a $10 billion sales increase since 2010. Next year should see another increase of 70 percent, the department says.

Those sales -- plus the government-to-government arms exports overseen by the Pentagon -- make the United States the world's top provider of major conventional weapons, according to the Stockholm International Peace Research Institute. Russia, France, and China followed behind. Much of the recent U.S. increase came from vastly expanded sales to Saudi Arabia, Brazil and India.
- By Zach Toombs, R. Jeffrey Smith, and the Center for Public Integrity | Foreign Policy
Posted by Atlantic Star